The cross of the Society of the Sacred Heart is precious both in the richness of its spiritual
significance and in the quality of its heritage. This cross is very similar to the cross given by St.
Francis de Sales to the Daughters of the Visitation and, in our present day, also to the oblates of St.
Francis de Sales. This cross, in turn, was modeled after the pectoral cross of the saintly Archbishop.

History of the Cross

St. Francis de Sales did not wish for this cross to be a crucifix.  The wearer is to be the “body”
so that he may, “fill up those things which are wanting in the Passion of Christ,” as St. Paul says.
Nothing is wanting in the Passion of Christ but our cooperation, our generous oblation of self.
Francis de Sales had special veneration for St. Sebastian, patron of the chapel at the chapel of
Sales. He generally preached there on January 20. Once, referring to the arrows which are the
insignia of St. Sebastian, he said, “the bishop’s cross must be like the insignia of this saint, who is
represented with piercing arrows all over his body, to announce to all that he is a servant of Jesus
Christ.” Animated by this sentiment, instead of the cape and scapular, he prescribed for his
Daughters of the Visitation that they should bear on their breasts a silver cross on which were the
names of Jesus and Mary- “so that,” as he wrote to Mother Chantal, “everybody will know that our
daughters belong to Jesus Christ crucified” (Année Sainte des religieuses de la Visitation Sainte
Marie Vol 1 pp. 520). 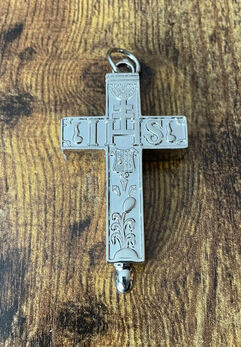 IHS – The monogram of the name of Jesus in Greek reminds us that he is our savior and that we
are called to be “other Christs,” to reproduce his life on earth and to manifest God’s love for all; we
do this through suffering and dying to ourselves.
The Double Cross Engraved Above the “H” is not a Latin cross, but rather an Eastern one.
Like the Greek letters, this deliberate choice of form manifests that Church unity, which was so
desired by St. Francis de Sales and symbolized in the concept of the union of Christ with his
Church, our life of union with God.  The empty cross in the Eastern Rite is a symbol of Christ’s
victory over sin and death; thus, it also tells us that it is the Risen Christ whom we follow.
The Drops of Blood symbolize the love of charity which animates our lives.  They recall the
tongues of fire which descended upon the Church at Pentecost.  The whole Trinity is represented on
the front side of the cross:  the Holy Spirit’s great work of love manifested at Pentecost; the Son’s
work of Redemption symbolized by the cross, and the Father’s work of creation and his dominance
in the Hebrew Scriptures symbolized by the mountain and olive branch.

The Three Nails tell us that our life is one of continual mortification, sacrifice and acquiescence to
the will of God, and also that we must be ready to die for Christ, being faithful, “even to the
shedding of our blood.”
The Mountain at the Bottom of the Cross represents Mount Sinai, the mountain of the Covenant
of the Hebrew Scriptures.  Being at the base of the cross, it represents that with creation began all of
salvation history which culminates in Christ’s resurrection and which is perpetuated and applied to
all in the Church through the work of the Spirit.
The Olive Branch is a symbol of peace and of God’s mercy in the Hebrew Scriptures.  It is above
the mountain to tell us that from fidelity to our vows we draw peace. 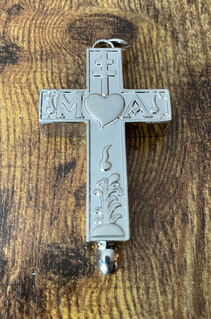 ​The Letters “M” and “A”
There are two explanations for the meaning of “M – A”:
1. The letters “MRA” were engraved on St. Francis’ pectoral cross (an abbreviation for
Maria). On the Oblate profession cross (and the Visitation cross as well), the “R” is removed
and the Heart is substituted in its place. Thus the “M – A” is an abbreviation of the name of
Mary, Mother of God.
2. The letters M – A are an abbreviation for Mons Amoris, the mount of love, which is
on Calvary. On this Mons Amoris, Jesus’ Heart was opened by the lance and His love was
poured out upon the world, thus the heart is flanked by the letters M and A.
The Three Flames symbolize the theological virtues of Faith, Hope and Charity that bind us
directly to God.
The Mountain at the Bottom of the Cross appears again with added Marian emphasis that Mary,
as the “New Eve,” responds with a fidelity that brought us peace in the person of her Son.
The Symbols for Mary on the hidden side of the cross remind us that by imitation of and recourse
to her, we are to manifest the life of her Son in our lives and so to become Theotokos, a God-bearer
by how we live and minister.
The Heart Surmounted by Two Crosses  Speaking to St. Jane de Chantal, St. Francis de Sales
says, “I thought, my dear Mother, if you agree, that we should take for our arms a single heart; this
poor heart serving as an enclosure for a cross which will surmount it and will be engraved with the
holy names of Jesus and Mary.” According to this, the heart, which is that of Mary, is surmounted
with two crosses.